Traveling 2,300 Miles Along the East Coast Greenway to Strengthen Communities, Promote Cooperatives and Honor Volunteerism
May 8, 2012 3:15 PM ET
Tweet This:
.@CabotCoop #CommunityTour begins this weekend http://3bl.me/py62fr celebrates those who do good in our #communities. #coops #volunteers
Press Release

(3BL Media) Cabot, VT - May 8, 2012 - Cabot Creamery Cooperative is thrilled to announce The 2012 Community Tour to celebrate those who give their hearts, time and skills to strengthen communities. The Tour will kick off on May 12th in Miami, Florida, and continue 2,300 miles up the East Coast, culminating in Portland, Maine, on July 7th, the International Day of Cooperatives. Eight major weekend stops will be held in key cities along the route: Miami, Charleston, Durham, Fredericksburg, Wilmington, New York City, Providence and Portland. Smaller weekday events will take place at stops in between. Community and family events vary by city but will incorporate overall themes of the tour: cooperatives, community service and volunteerism.

“Since 1919, the 1,200 farm-family owners of Cabot Creamery Cooperative have been an integral part of the communities they serve,” says Roberta MacDonald, Cabot’s Senior Vice President of Marketing. “Our farmers labor from sunrise to sunset, yet they still find the time to volunteer, strengthening their local governments, organizations or charities. In honor of them, we want to recognize those who also give selflessly to their communities.”

Admission and activities at each major stop of the tour is free and open to the public. These include fun and games for families, guest speakers and entertainment, food and beverages, cooking and cheese-making demonstrations, health programs, live media broadcasts and other activities designed to bring families, friends and neighbors together to celebrate the spirit of community. A complete tour schedule can be found at www.communitytour.coop.

Since the Tour route follows the path of the East Coast Greenway-- the traffic-free path linking cities from Florida to Maine—walkers and cyclists like Cathy and Myron Skott will participate in the tour. The Skotts, avid recumbent cyclers from Johns Creek, GA, will be biking 2,300 miles from Miami to Portland.

“The 2012 Community Tour coincides with two other programs central to Cabot’s cooperative principles. In February, Cabot launched Reward Volunteers®, a mobile and web app that encourages participants to log their volunteer activity and earn rewards for themselves and their volunteer organizations. The Grand Prize winners will be announced on July 7, 2012, at the culmination of the Community Tour. Visit rewardvolunteers.coop for more information.

2012 has been declared The International Year of Cooperatives by the United Nations. Cabot created The Community Tour to bring awareness to the unique cooperative business principles of promoting volunteerism and supporting communities.

May 12 – ‘Kick Off’ Event at Bicentennial Park, Miami, FL

NOTE TO EDITORS
To access the Reward Volunteers demo video, go to: http://www.youtube.com/watch?v=sC1H3UxrYtY

ABOUT CABOT CREAMERY COOPERATIVE
Cabot Creamery Cooperative has been in continuous operation in Vermont since 1919, and makes a full line of cheeses, yogurt, sour cream, cottage cheese and butter. Widely known as makers of “The World’s Best Cheddar,” Cabot is owned by the 1,250 dairy farm families of Agri-Mark, the Northeast’s premier dairy cooperative, with farms located throughout New England and upstate New York. For more information on Cabot, visit: http://www.cabotcheese.coop 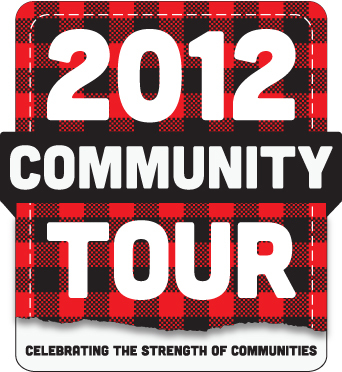