Building on a partnership that began in 2004 between one of the world’s leading children’s hospitals - Cincinnati Children’s and the global automotive manufacturer - Toyota, the Buckle Up for Life program is designed to help save lives by educating communities about the number one cause of death of children under the age of 12 in the United States--motor vehicle crashes.

Car crashes are the number one killer of children in the United States between the ages 1 and 12.[i] Only 1 out of every 4 child car seats are properly installed.[ii] Furthermore, due to multiple factors, Hispanic and African American children are 10 times less likely to be properly restrained in a vehicle[iii].

Buckle Up for Life has recently conducted a survey which reveals parental overconfidence in their knowledge about child car seats may be a contributing factor to some deaths of children who are involved in fatal car crashes.

“The research findings are particularly alarming because even though parents indicate they are completely confident throughout the child car seat journey, the number of children dying unnecessarily in motor vehicle-related crashes is still high,” said Dr. Victor Garcia, founding director of Trauma Services at Cincinnati Children’s, professor of pediatric surgery and visionary of Buckle Up for Life. “This is a public health emergency of epic proportions. The seat belt, or car seat should be held in the same health category as a vaccine as it has the power to save lives,” said Garcia.

As part of Toyota’s ongoing commitment to provide safety programs to passengers and drivers of all ages, the company has increased its funding of Buckle Up for Life by six million dollars over the next three years, allowing the program to expand from the current eight cities to a total of 17 cities by 2016. This investment is added to the more than two and a half million dollars of support Toyota has provided over the past nine years.  To-date Buckle Up for Life has had tremendous results, including providing more than 40,000 child car seats to families in need.  In one city alone, the use of proper child car seats by program participants nearly tripled.

“At Toyota, we are strongly committed to the belief that driver and passenger safety is a universal need and something everyone should have access to,” said Latondra Newton, group vice president of Toyota Motor North America Inc. “That is why we partnered with Cincinnati Children’s to create Buckle Up for Life.  We consider today to be both a celebration of all we have achieved and a call to action for the tremendous amount of work still to be done.”

Buckle Up for Life Pledge

[i]http://www.safercar.gov/parents/CarSeats.htm#
[ii]http://www.nhtsa.gov/Safety/LATCH/
[iii] NHTSA Traffic Safety Facts (2008 Data) -- Research Note
Media Contacts:
About Buckle Up for Life Survey
The findings reported in this release are from an online survey conducted by Edelman Berland. The sample consisted of 1,010 parents, with children 12 years of age or younger, who currently own or lease a vehicle. The interviews were conducted from August 8th – August 14th, 2013. All surveys were taken online and the respondents are nationally representative of race and region. The margin of error is ± 3.04 percentage points at the 95% confidence level. Each questionnaire took an average of 12 minutes to complete and was offered in both English and Spanish.

ABOUT BUCKLE UP FOR LIFE
Buckle Up for Lifeis a national, community-based injury prevention program, created in 2004 in a partnership between trauma specialists at Cincinnati Children’s and Toyota. The program’s main goal is to help save lives by educating communities about the number one cause of death of children under the age of 12 in the U.S.

Buckle Up for Lifeworks with local hospitals, churches and other trusted community partners in cities across the United States to address the economic, cultural and language barriers around motor vehicle safety. Over a six-week period, the program’s medical experts and trained specialists work closely with participants of all ages and backgrounds to deliver vital safety information in an engaging, culturally-sensitive and memorable way. To date, the program has donated more than 40,000 child car seats to families in need and has made a significant impact, including tripling the proper use of child car seats among program participants in one city.

Through an expanded multi-year, multi-million dollar commitment from Toyota in 2013, Buckle Up for Life will continue to expand to new cities each year while leading a national movement to help elevate the conversation about this critical issue. To take the Buckle Up for Lifepledge, learn more about the program and find child passenger safety resources, please visit www.buckleupforlife.org.

ABOUT CINCINNATI CHILDREN’S HOSPITAL MEDICAL CENTER
Cincinnati Children’s Hospital Medical Center ranks third in the nation among all Honor Roll hospitals in U.S. News and World Report’s 2013 Best Children’s Hospitals ranking. It is ranked #1 for cancer and in the top 10 for nine of 10 pediatric specialties.

Cincinnati Children’s, a non-profit organization, is one of the top two recipients of pediatric research grants from the National Institutes of Health, and a research and teaching affiliate of the University of Cincinnati College of Medicine.

Additional information can be found at www.cincinnatichildrens.org. Connect on the Cincinnati Children’s blog, via Facebookand on Twitter.

Toyota is committed to being a good corporate citizen in the communities where it does business and believes in supporting programs with long-term sustainable results. Toyota supports numerous organizations across the country, focusing on education, the environment and safety. To date, Toyota has contributed $700 million to nonprofits in the United States. 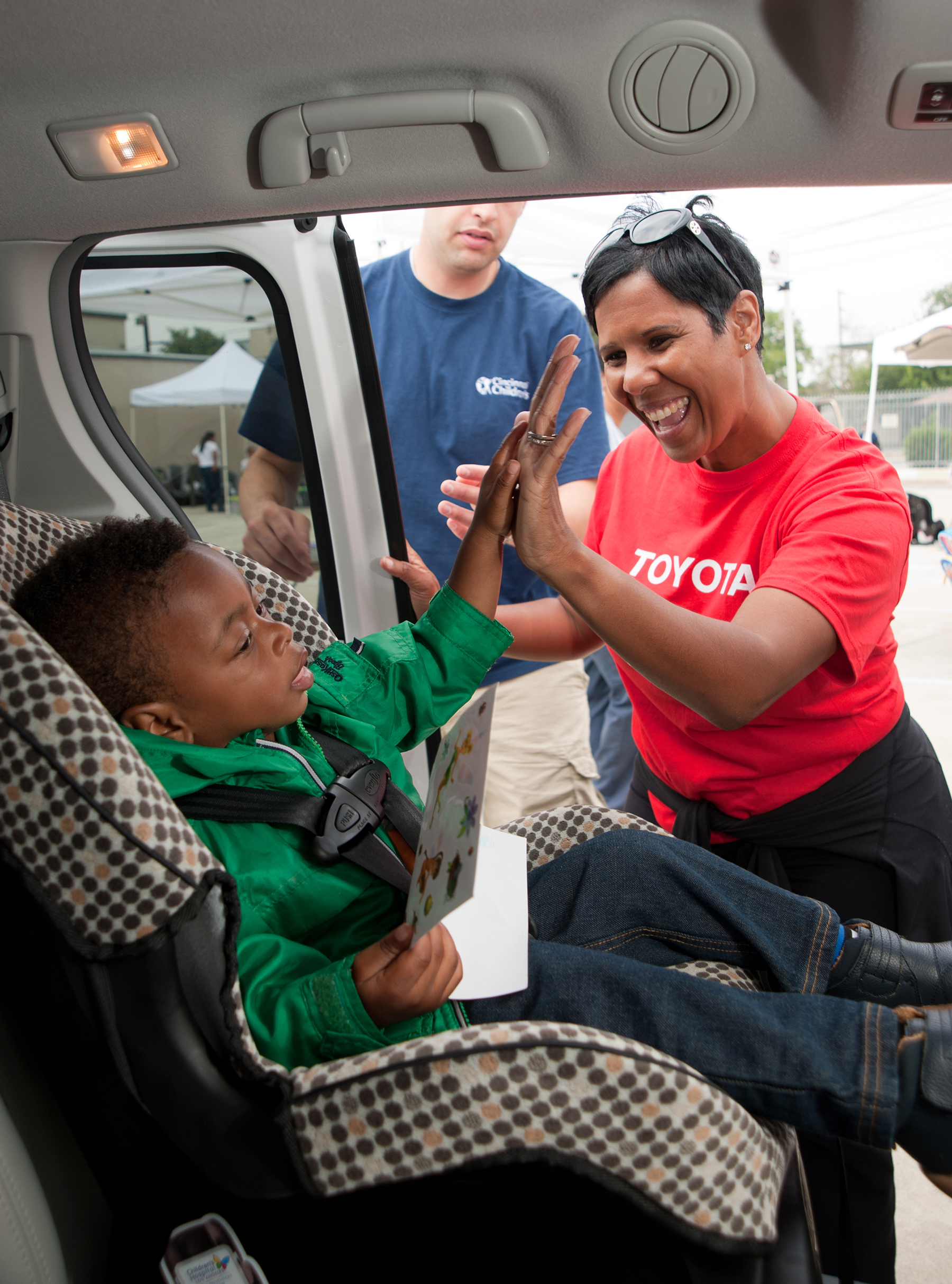