SAN FRANCISCO, May 30, 2017 /3BL Media/ – Habitat for Humanity and Wells Fargo & Company today announced a new commitment to improve 100 homes with veterans in nearly 30 communities across the country from Seattle to South Palm Beach, Florida.

Launched in May during Military Appreciation Month with the support of a $300,000 grant from the Wells Fargo Housing Foundation, Wells Fargo volunteers will work alongside veterans on projects such as painting, landscaping and other improvements that support sustainable housing.

“Veterans have made extraordinary sacrifices for our country, and by teaming up with Habitat for Humanity we will work side-by-side with veterans to make important improvements to their homes that may otherwise be unattainable,” said Martin Sundquist, executive director of the Wells Fargo Housing Foundation. “Our team members are active and engaged volunteers and support their local communities by applying their time and talents where they live and work, and this effort is one of several ways we work with Habitat to create affordable and sustainable housing.”

Local Habitat organizations will identify home improvement opportunities in their communities and lead the work with veterans and Wells Fargo volunteers to beautify homes by landscaping, painting and other improvements.

“Access to safe and decent housing is a challenge for far too many households, including our country’s veterans,” said Colleen Finn Ridenhour, senior vice president of Development, Habitat for Humanity International. “This most recent commitment by the Wells Fargo Housing Foundation will enable us to work with veterans to improve their homes and, we believe, make a positive impact to their lives and their neighborhoods.”

Wells Fargo team members have volunteered more than 315,000 hours to build and improve more than 2,100 Habitat homes with low-income homeowners, seniors and veterans since 2010. Wells Fargo Housing Foundation donated more than $44 million from 2010 to 2016 to Habitat locally and nationally, of which $14 million has supported national programs with Habitat for Humanity International and its mission of a world where everyone has a decent place to live.

About the Wells Fargo Housing Foundation

In 2016, the Wells Fargo Housing Foundation donated $20 million in support of affordable housing initiatives serving low- and moderate-income households – including for seniors, veterans and families – through community revitalization efforts. Since its inception in 1993, the Wells Fargo Housing Foundation has invested more than $190 million to such efforts, along with mobilizing more than 4.7 million team member volunteer hours to build and rehabilitate nearly 7,100 homes and counting. www.wellsfargo.com/about/wfhf_oview.

Wells Fargo & Company is a diversified, community-based financial services company with $2 trillion in assets. Founded in 1852 and headquartered in San Francisco, Wells Fargo provides banking, insurance, investments, mortgage, and consumer and commercial finance through more than 8,500 locations, 13,000 ATMs, the internet (wellsfargo.com) and mobile banking, and has offices in 42 countries and territories to support customers who conduct business in the global economy. With approximately 273,000 team members, Wells Fargo serves one in three households in the United States. Wells Fargo & Company was ranked No. 27 on Fortune’s 2016 rankings of America’s largest corporations. Wells Fargo’s vision is to satisfy our customers’ financial needs and help them succeed financially. News, insights and perspectives from Wells Fargo are also available at Wells Fargo Stories. 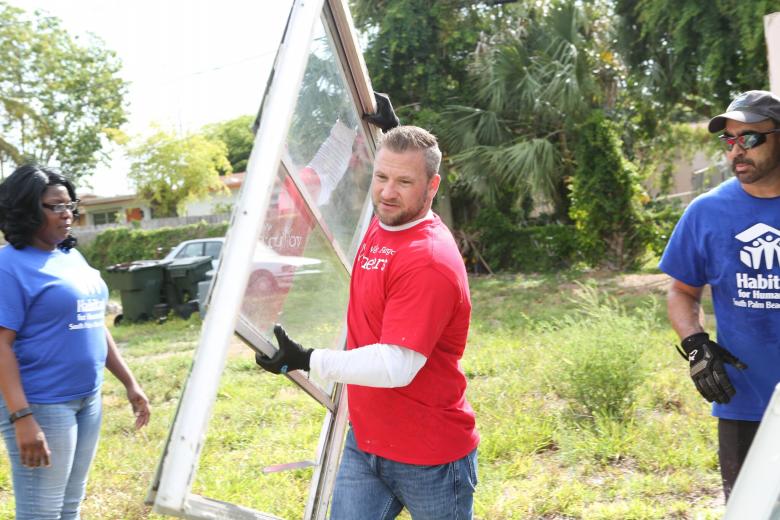