Honda Reports on its Environmental Performance in North America

In FY2015, the company unveiled its ‘Green Path’ initiative, which seeks to minimize Honda’s environmental impact in every facet of its operations in North America, from the manufacture of new products to their distribution, sales, service and end-of-life disposal. This initiative supports the company’s environmental vision and Honda’s challenging goal to halve total CO2 emissions from its products and operations globally by 2050, compared to 2000 levels.

“We are very optimistic about our ability to innovate for improved environmental performance,” said Takuji Yamada, president of Honda North America, Inc. “We have more work to do, but our vision is clear, and we have made an effort to share this vision with all of our associates in North America.”

The NAER also details Honda’s many associate-driven initiatives and community-outreach programs that support environmental activities. The report also features the company’s stance on public policies as they pertain to energy usage and development of alternate fuel vehicles and technologies.

The report is Honda’s eleventh annual report on the environmental impact of its operations in North America, including the United States, Canada and Mexico, and covers the period from April 1, 2014 to March 31, 2015 (fiscal year 2015).

Additional information on Honda’s environmental performance outside of North America can be found in Honda Motor Company’s Sustainability Report, with a focus on the company’s activities in Japan – available at world.honda.com (or by clicking here).

Based on its vision of "Blue Skies for our Children," Honda is working to advance technologies that address society's environmental and energy concerns.  The company's "Green Path" approach seeks to reduce or eliminate the use of substances of concern (SOCs) and scarce natural resources in the design of its vehicles, significantly reduce the CO2 intensity and water use of its manufacturing operations, continue to decrease CO2 emissions from the transportation of vehicles from its plants to dealers, and expand the involvement of U.S. Honda and Acura dealers as well as powersports, power equipment and marine dealers in its "Green Dealer" program.

These activities reinforce Honda's goal to voluntarily reduce its total corporate CO2 emissions by 50 percent by the year 2050, compared to 2000 levels. In 2006, Honda was the first auto company to voluntarily and publicly commit to global reductions in its CO2 emissions. In 2015, for the fifth consecutive year, Honda earned a perfect climate disclosure score of 100 and was listed in the CDP's Climate Disclosure Leadership Index.

[iii] Total CO2e emission (from consumption of electricity and natural gas) include 15 manufacturing operations owned and operated by Honda in North America. 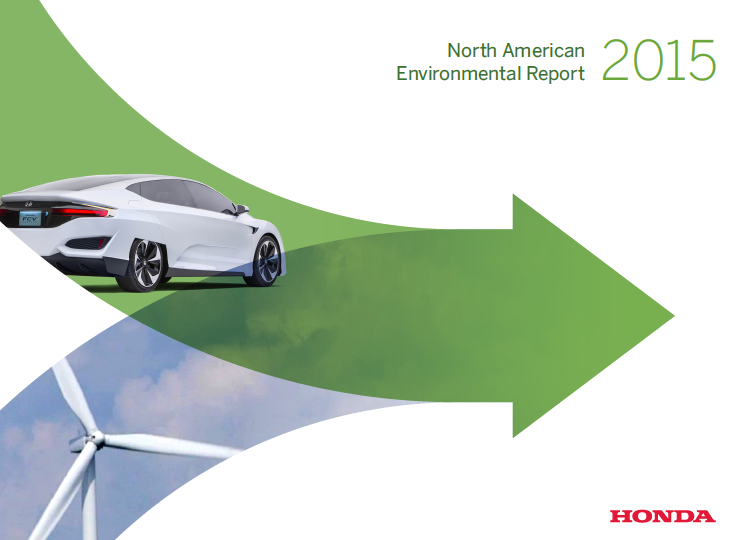