NEW YORK, NY, June 4, 2013 /3BL Media/— While economic recovery is taking its time, companies have not waited to rebound with their giving programs; the majority of companies increased giving since 2007 after adjusting for inflation, despite a slow recovery of corporate profits since the economic downturn. Both cash and non-cash giving increased during this timeframe, with a higher percentage of non-cash contributions in 2012 defining the post-recession giving era. In addition, companies offered more paid-release time and outside-company time volunteer programs to engage employees in their giving programs, and the largest percentage of a typical company’s giving budget went to support K-12 and higher education programs. CECP, where Fortune 500 CEOs turn to achieve societal progress and sustainable business performance, released at the CECP Summit the first analysis of 2012 corporate giving data drawn from its Corporate Giving Standard (CGS) survey, conducted in association with The Conference Board.

"Noncash giving is defining the new corporate societal engagement," stated Daryl Brewster, CEO, CECP. "This has major implications for NGOs all over the world. From employees coming in to solve efficiency challenges, to product donations that enable important capacity upgrades, community partners and businesses around the world are working smarter, together."

"The trends we’re seeing in the numbers are aligning with the way companies are doing business in this post-recession economy," stated Jon Spector, President and CEO, The Conference Board.  "Companies today are striving to be sustainable and efficient in their daily operations, and they are doing no less in their efforts to solve some of society’s toughest challenges. They are applying the best of their businesses’ assets to tackle these tough issues."

Giving professionals cited numerous factors for increased corporate giving from 2007 to 2012. Common reasons for changes in giving throughout this timeframe include:

Companies that decreased giving from 2007 to 2012 often cited declining profits as a main reason for lower giving levels.

All companies were asked to predict how 2013 contributions will change compared with 2012. Among companies that made a prediction,[ii] 40 percent expect an increase in funding, 42 percent expect no change, and 18 percent predict a decline.

Each year, in association with The Conference Board, CECP presents an in-depth analysis of the results of an annual survey of corporate philanthropy trends in the publication, Giving in Numbers, which is released free-of-charge to the public each fall. The report answers pressing questions about the state of corporate giving, rates of giving internationally, a discussion of the motivations for giving, employee engagement, and more.

About the Corporate Giving Standard Survey

The Corporate Giving Standard (CGS), conducted by CECP in association with The Conference Board, is an online philanthropy measurement and benchmarking tool for participating companies. All figures referenced are inflation-adjusted and based on a matched-set of 96 companies responding to the CGS survey 2007-2012. This matched-set of companies combined to give a total of 15.27 billion in cash and product giving in 2012, the most recent year of data available anywhere.

CECP draws together and empowers senior executives of the world’s leading companies to achieve unprecedented progress on societal challenges while driving business performance.

About The Conference Board

The Conference Board is an independent business membership and research association working in the public interest. Our mission is unique: To provide the world’s leading organizations with the practical knowledge they need to improve their performance and better serve society. The Conference Board is a non-advocacy, not-for-profit entity holding 501 (c) (3) tax-exempt status in the United States.

[ii] The sample size for this response was 139. 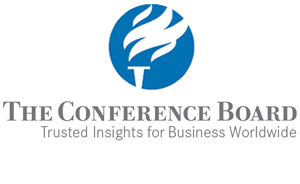