Recognizing corruption as one of the greatest obstacles to economic and social development around the world, and good governance as critical for sustainable development and responsible business, the Call to Action: Anti-Corruption and the Global Development Agenda represents a call from companies to Governments to promote anti-corruption measures and to implement policies to establish systems of good governance.

“It was clear a decade ago – and remains today – that corruption so profoundly corrodes sound business practice and good governance, and thus our ability to realize the other nine principles, that it uniquely deserved to be added to the commitments on which our Global Compact is founded,” said Georg Kell, Executive Director of the UN Global Compact. “While much has been accomplished, it is evident that corruption continues to be a critical challenge for business. Only by fostering a culture of integrity, transparency, accountability and good governance, can an equitable, inclusive and sustainable global economy be achieved.”

Companies that sign the Call to Action send a strong signal to Governments and businesses worldwide that it is important to put an end to bribery and corruption in all its forms. The Call to Action asks Governments to take five specific actions, ranging from fully implementing and enforcing the tenets of the UN Convention against Corruption by strengthening anti-corruption policies, laws and enforcement mechanisms to create a level playing field and incentivize good behaviour, to committing to engage in competitive and transparent procurement processes through public advertising of all Government procurement cases (read all five appeals).

The Call to Action – which is supported by the UN Global Compact, the UN Office on Drugs and Crime, Transparency International, the Open Contracting Initiative, the World Bank Institute and the Global Organization of Parlamentarians against Corruption – will be forwarded to UN Secretary-General Ban Ki-Moon to highlight the private sector’s continuing efforts to work with other stakeholders to address corruption.

Signatories to the Call to Action will be acknowledged at the UN Global Compact’s 10th Anniversary of the 10th Principle, to be held in New York on 10 December 2014. The event will also highlight the private sector’s achievements in the fight against corruption over the past decade and discuss emerging anti-corruption measures in both developed and emerging markets.

Find more information about the Call to Action online at www.unglobalcompact.org/anti-corruption and follow the conversation on Twitter using #BizAgainstCorruption.

About the United Nations Global Compact

Launched in 2000, the United Nations Global Compact is both a policy platform and a practical framework for companies that are committed to sustainability and responsible business practices. As a multi-stakeholder leadership initiative, it seeks to align business operations and strategies with ten universally accepted principles in the areas of human rights, labour, environment and anti-corruption, and to catalyze actions in support of broader UN goals. With 8,000 corporate signatories in 145 countries, it is the world’s largest voluntary corporate sustainability initiative. unglobalcompact.org 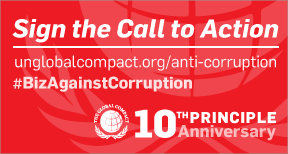