February 29, 2016 /3BL Media/ - The Ray C. Anderson Foundation is the new sponsor of “Talk with Green Guy,” a rapidly growing weekly show hosted by Eric Moncrief on WGST 640 AM, which airs locally Sunday mornings at 9:00 a.m. Eastern with podcasts available at www.greenguymedia.com.

Since the show’s launch, Eric Moncrief, radio host, sustainability advocate and owner of Green Guy Media, Inc., has interviewed more than 200 guests on sustainability-related issues, including notables from the City of Atlanta, City of Denver, U.S. Green Building Council, the U.S. EPA, and Keep America Beautiful.

“Our mission and passion is to promote change by giving individuals, communities and companies a voice to share what they are doing locally or nationally,” Moncrief said. “That’s how we came to know the Foundation, when we invited John Lanier to tell the story of how Ray Anderson’s legacy continues to make an impact in higher education and business.”

John A. Lanier, executive director of the Ray C. Anderson Foundation, was impressed with the depth and reach that Moncrief has established for getting to the core of key sustainability issues that affect environment, business and society.

“Eric, like Ray, believes that the way we create change is ‘one mind at a time,’” said Lanier. “He’s doing his part to bring to life stories that connect people to new ideas, new voices and new ways of solving some of our biggest problems. We are thrilled to be a part of that.”

About The Ray C. Anderson Foundation

The Ray C. Anderson Foundation is a 501(c)(3) not-for-profit organization that seeks to promote a sustainable society by supporting and funding educational and project-based initiatives that advance knowledge and innovation in sustainability, including The Ray, a project to transform the Ray C. Anderson Memorial Highway in Southwest Georgia to a demonstrate of what the world’s first regenerative highway might look like. 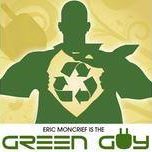