Africa Doubles Research Output Over Past Decade, Moves Towards a Knowledge-Based Economy

Dec 3, 2013 10:00 AM ET
Tweet This:
New article on research trends in Africa @ http://3bl.me/yvsk6a
Article
Africa doubles research output over past decade, moves towards a knowledge-based economy

There is no doubt that economic growth across sub-Saharan Africa has been stellar in recent years, illustrated by GDP growth expected to be 5.3 per cent in 2014 (1). Coverage of Africa has increasingly focused on this growth, seeing the encouraging future prospects for many countries and the improved life chances for the younger generation as a result. However, to date, there has been little focus on the flourishing academic and scientific success on the continent as countries move beyond agriculture-dominated economies towards a research and knowledge-based future.

One of the most positive signs for Africa has been the recent increase in scientific research being conducted by local African scientists. From 1996 to 2012, the number of research papers published in scientific journals with at least one African author more than quadrupled (from about 12,500 to over 52,000). During the same time the share of the world’s articles with African authors almost doubled from 1.2% to around 2.3%.

Looking at Africa’s outputs overall and as a share of total articles globally, we see clearly that the continent is starting to emerge scientifically onto the world stage. Admittedly starting from a relatively low base, this still reflects more than 52,000 research outputs in 2012 featuring at least one African author. Clearly, this also has important implications for the entire developing world, given the potential for “South-South” information transfer. Through published research, what is learned in one region/country can be the basis for improvements in other developing-world regions and countries.

So what are the factors contributing to this promising trend? They are many: increased funding, significant policy changes within countries, improved research infrastructure, both human and physical, ICT resources, open, free and low cost access to peer reviewed literature, and research capacity building training have all contributed to the positive, upward trend in African research output.

One key contributor to increased research access is Research4Life, a public-private, UN-publisher partnership that provides scientists in developing countries with free or low-cost access to articles from leading scientific journals. Altogether, more than 35,000 peer-reviewed resources are available to researchers in the developing world and 6,000 institutions from more than 100 developing countries have signed up to use Research4Life programs. A 2010 Research4life user experience review revealed that more respondents (24%) cite HINARI as a source for life-science and medical research than cite any other source, while more respondents (32%) cite HINARI as the source they use most frequently. For agricultural research, AGORA similarly tops the list of resources used, with equivalent figures of 27% and 54% respectively (3).

However, as Richard Gedye, Director of Outreach Programs for the International Association of Scientific, Technical & Medical Publishers (STM), who serves as Research4Life’s key publisher representative, recently pointed out, demonstrating real research output impact is not a straightforward undertaking (4). “Through our booklet, Making a Difference, we’ve been able to build up a convincing collection of case studies: more robust research agendas, stronger grant applications, better teaching and improved health outcomes have been achieved (5). A strong bibliometric analysis, however, remains problematic due to a lack of basic information about registered institutions and other important viable, co-existing access programs such as the International Network for the Availability of Scientific Publications (INASP) and open access. Instead, we’ve decided to plan a comprehensive survey in 2014 of the impact of Research4Life access with African researchers, research funders, research administrators, physicians, trainers and librarians.”

But there’s no room for complacency. In the November 2010 report on "Growing knowledge: Access to research in east and southern African universities" from the Association of Commonwealth Universities, Jonathan Harle, now INASP’s Senior Programme Manager, Research Access and Availability, clarifies that increased access and bandwidth won’t solve the problem (6). Skills development and awareness of free and low cost access to peer reviewed research need to receive much more attention if research output is to grow substantially. INASP is another critical contributor to African research output growth with a focus going far beyond access to support the full cycle of research capacity building across 22 countries. They provide a range of services including developing deeply discounted consortial arrangements, training librarians in managing digital resources, mentoring researchers in academic literacy and authorship skills and supporting the process of local online journal development and hosting.

The rapid growth of open access also represents a significant contributor to African research output. David Tempest, Director of Access Relations at Elsevier, hosted an “Open Access in Africa” workshop in Kenya in April 2013 in cooperation with the African Academy of Sciences to explore the African access experience and how publishers can assist in the process of enhancing access to African research. “Africa has some outstanding researchers, and the quality of their work is improving, but there needs to be a concerted effort to work together and create excellence on a local level. […] At Elsevier, we're happy to work with these organizations to run author workshops to help researchers understand how to publish in journals, the ethical dimensions of publishing, and the emergence of new publishing possibilities, such as open access.” (7). As a follow on, Elsevier is supporting the National Research Foundation’s National Postdoctoral Forum, which will take place in Cape Town in early December 2013. He noted, “This is an opportunity to work with young researchers in Africa to illustrate how the scholarly communication system is changing and to answer any questions on how young researchers can publish in our journals.”

While African authors have nearly doubled their article share over the past decade, the returns could be many times greater over the next decade if awareness, usage and research capacity are tackled in a collaborative and integrated manner by African institutions, access programs and publishers.

Research4Life is a public-private partnership of over 200 international scientific publishers; the International Association of Scientific, Technical and Medical Publishers (STM); Cornell and Yale universities in collaboration with WHO, FAO, UNEP, WIPO and technology partner Microsoft. Since 2001, the four programs — Access to Research in Health (HINARI), Access to Global Online Research in Agriculture (AGORA), Online Access to Research in the Environment (OARE) and Access to Research for Development and Innovation (ARDI) — have grown and developed to the point where they now give researchers at more than 6,000 institutions in over 100 developing-world countries and territories free or low-cost online access to over 35,000 peer-reviewed international scientific journals, books and databases provided by leading scientific publishers. In November 2012, Research4Life partners announced their commitment to the program through 2020. 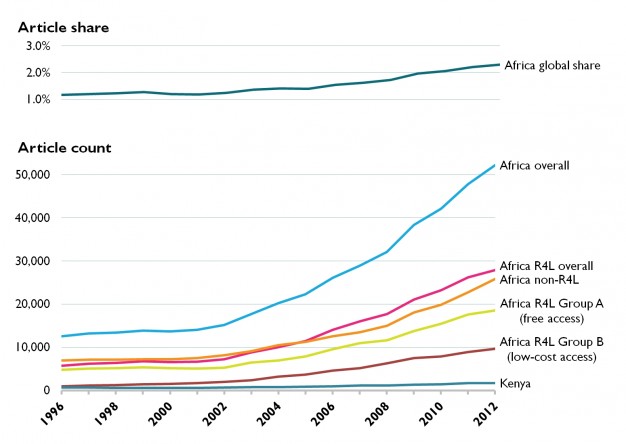 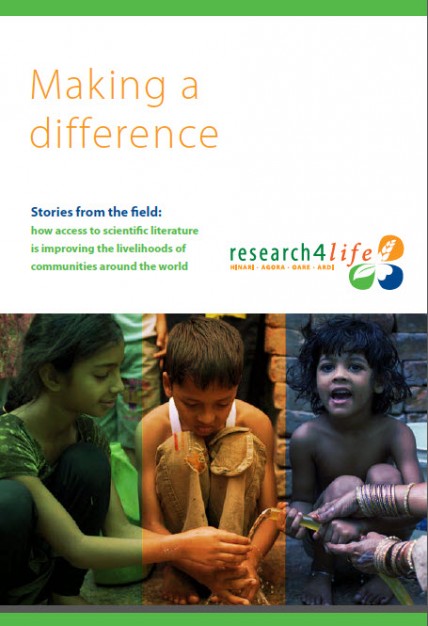