The event took place in conjunction with the LA Galaxy Foundation’s new partners Peace over Violence, a sexual and domestic violence, stalking, child abuse and youth violence prevention center headquartered in Los Angeles and dedicated to building healthy relationships, families and communities free from sexual, domestic and interpersonal violence. In addition to the event at City Hall, the LA Galaxy Foundation hosted local high school girls for a soccer clinic and Peace Over Violence presentation on sexual violence awareness.

Now in its 18th year, millions of people everywhere—on campuses and military bases, and in Fortune 500 companies and the halls of government, across the country and world—wore jeans to raise awareness around sexual violence issues and to support survivors of rape and sexual assault, explained Patti Giggans, Denim Day Founder and Executive Director of Peace Over Violence, the Los Angeles-based nonprofit that organizes the campaign.

With the slogan, “There is No Excuse and Never an Invitation to Rape,” Denim Day is marked annually with events around the U.S. For 2017, high-profile events were held in Los Angeles, New York City, Sacramento, Detroit and Milwaukee. As in previous years in greater Los Angeles, the City, County and School District officially recognized Denim Day and encouraged students, staff and employees to wear denim in support of the awareness campaign. For the fourth year, global lifestyle brand GUESS?, Inc. and the GUESS Foundation signed on as the official fashion sponsor of Denim Day. To register to make your promise to support survivors and not stay silent about sexual assault and rape, please visit http://www.denimdayinfo.org.

April is Sexual Assault Awareness Month, and Denim Day is a call to action for all people to come together by wearing denim as a visible sign of protest against sexual violence.  Take a stand and wear jeans by rocking your denim with a purpose to support survivors, and educate yourself and others about sexual assault.

The campaign was originally triggered by Italian Supreme Court ruling where a rape conviction was overturned because the justices felt that since the victim was wearing tight jeans she must have helped her rapist remove her jeans, thereby implying consent. The following day, the women in the Italian Parliament came to work wearing jeans in solidarity with the victim. Peace Over Violence developed the Denim Day campaign in response to this case and the activism surrounding it for the past 18-years. Since then, wearing jeans on Denim Day has become a symbol of protest against erroneous and destructive attitudes about sexual assault. In this rape prevention education campaign they ask community members, elected officials, businesses and students to make a social statement with their fashion by wearing jeans on this day as a visible means of protest against the misconceptions that surround sexual assault. 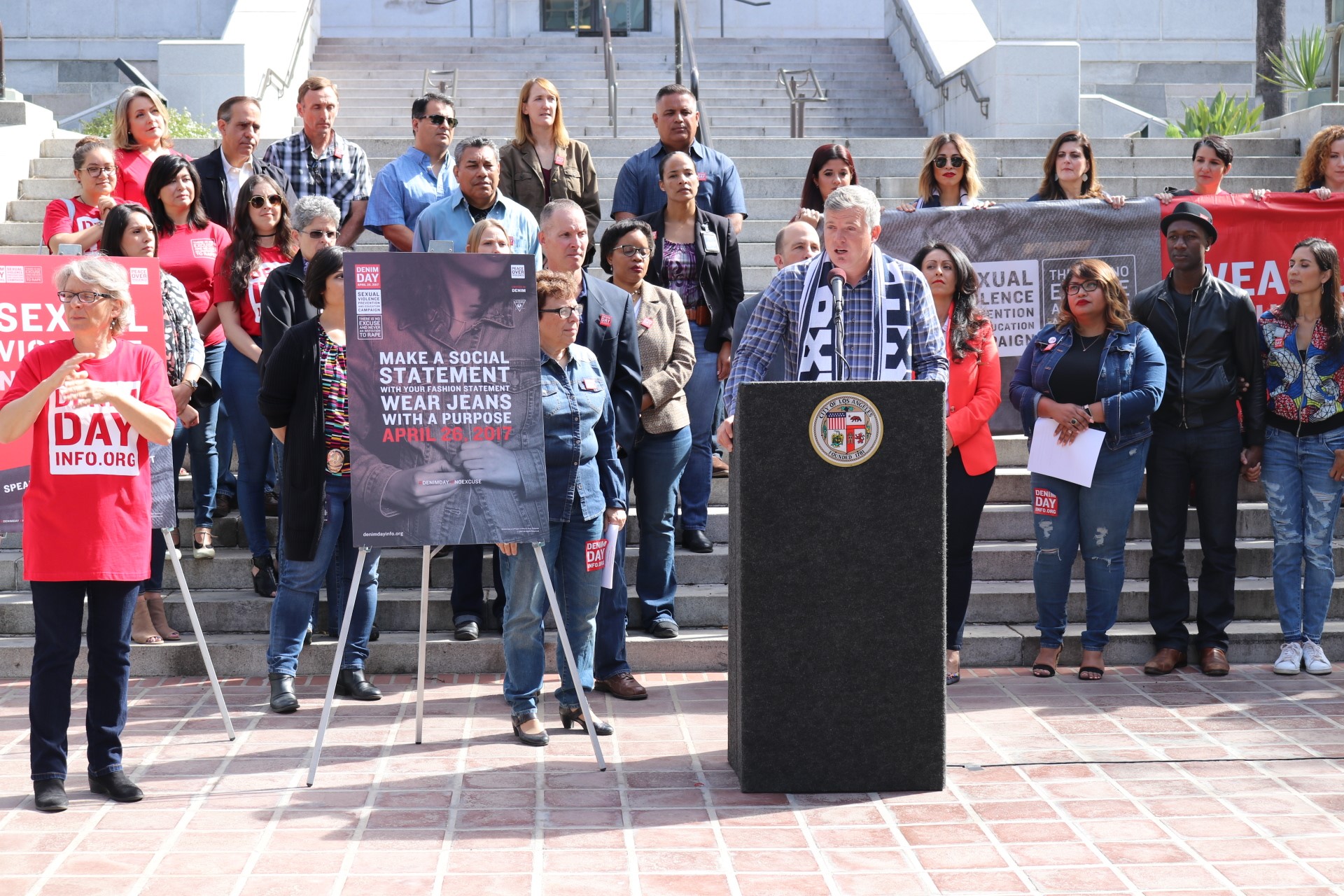