Moving freight by rail offers an efficient, cost-effective, and immediate way to reduce U.S. greenhouse gas emissions. If only 10 percent of long-distance freight now moving by truck moved by rail instead, annual U.S. fuel savings would approach nearly 1 billion gallons and greenhouse gas emissions would fall by around 11 million tons, based on a comparative study of the fuel efficiencies of trains vs. trucks.

The independent study, conducted for the Federal Railroad Administration, shows that trains are the most environmentally friendly way to move freight over land. The 2009 study revealed that trains are between 1.9 and 5.5 times more fuel-efficient than trucks – depending on the commodity being transported and length of haul – and generate up to two-thirds fewer greenhouse gas emissions.

The study provided a comparative evaluation of rail and truck fuel efficiency on corridors and for services over which both trains and trucks compete. Competitive moves were defined as those involving the same commodity and having the same or proximate origin and destination points. The study included a mix of short-, medium-, and long-distance movements; a mix of different commodities and different railcar and truck types; and a mix of geographic regions.

In their corporate sustainability reports, some of Norfolk Southern’s largest customers are making note of the move from trucks to rail and intermodal transport. Intermodal land transport typically involves rail for the primary move, with trucks providing short-haul moves for door-to-door customer pickup and delivery. Examples of our customers’ shift to rail transport include: 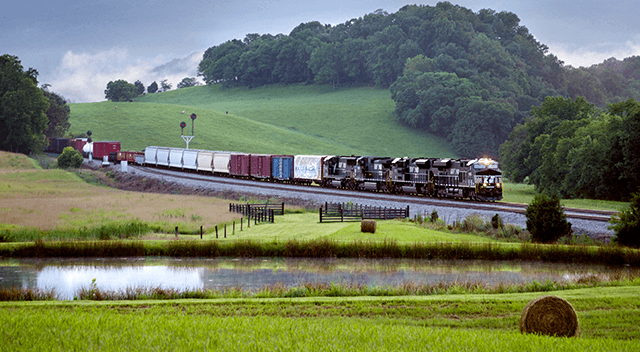