The Paris Effect: How the Paris Agreement is Driving Climate Action

Nov 3, 2016 10:00 AM ET
Tweet This:
How the Paris Agreement is Driving #Climate Action. #cop21 #ghg http://bit.ly/2cYfhMw
Article
This article was originally published on Climate Nexus

This past December, representatives from 195 nations gathered in Paris to negotiate an historic agreement to combat climate change and accelerate the transition to a sustainable, low-carbon future. After two weeks of negotiations, the nations unanimously agreed to adopt the international climate pact. On April 22, 2016, nations will again gather, this time at the United Nations headquarters in New York, to formally sign the Paris Agreement.

The world has already seen a significant shift towards stronger climate action, in the ensuing months since the adoption of the Agreement.

The adoption of the Paris negotiations delivered a signal to governments, businesses and the global public: All parties, from national governments to small businesses, must do their part to minimize the risks and impacts of climate change.

This signal has mobilized actions by public and private sector institutions to move away from fossil fuels, which drive climate change, and towards an economy powered by renewable energy.

The Paris Effect on Fossil Fuels

Coal-burning power plants are the top source of carbon emissions in the U.S., and a leading driver of man-made climate change around the world. Since the adoption of the Paris Agreement, there has been significant progress in the phase out of coal as an energy source.

A month after the Paris climate talks, the Obama Administration announced that it would halt new coal mining leases on public lands. Across the U.S., states have also taken action to go coal-free. New York Governor Cuomo pledged to close all coal plants in the state by 2020, and the state of Oregon voted for a complete ban on coal-generated power by 2035. The Paris Effect on the fossil fuel industry has extended to the private sector as well: In January, financial giant J.P. Morgan announced that it would no longer finance coal mines around the world due to the threat from climate change.

In addition to U.S. climate action, international governments are taking steps to transition away from fossil fuels as an energy source. A month following the adoption of the Paris climate pact, Vietnam announced that it would phase out coal. China, the world’s largest emitter, suspended construction of new coal plants for the next three years.

The Paris Effect on the Divestment

Since the adoption of the Paris Agreement, the divestment movement’s momentum has grown steadily.

In the past four months, prominent figures across the world, from California’s insurance commissioner to academics at Oxford and Cambridge, have joined the divestment movement, to protect themselves from the financial risks from climate change. A growing number of cities, countries and private institutions have already divested their funds from fossil fuel holdings this year, including the California Teachers Pension, Norway’s Wealth Fund–the largest in the world–and the Rockefeller Family Fund.

The Paris Effect on Investment and Finance

The Paris Agreement sent a price signal to markets, companies and investors across the world, accelerating a shift in funding and investment patterns that preceded Paris but has intensified since the landmark agreement was adopted.

The private sector and state-owned enterprises have begun widespread assessments of their exposure to climate risk, which was reflected in the record number of votes on climate change-related issues at this year’s annual US shareholder meetings. Businesses and governments have also shown an increased willingness to put a price on carbon, as evidenced by President Obama’s proposal for a $10/barrel oil tax and China’s announcement that it will expand its carbon trading market to eight major industries. The finance sector is putting increasing stock into green bonds in the wake of the Paris Agreement. Moody has estimated that the post-Paris green bond market in 2016 could exceed a record-breaking $50 billion. Of that $50 billion, a single company, Apple, issued $1.5 billion in green bonds.

The Paris Effect on Renewables

The shift away from the use of fossil fuels is only one part of the fight against global warming. The Paris Agreement goes further, urging the world to transition quickly to a low-carbon, sustainable future. In order to fully power this future, clean energy technologies such as wind and solar need faster investment, development and deployment.

Since December, groups on every level — countries, states, businesses and individuals – have displayed a massive appetite for clean energy, which attracted a record $329 billion in investment. Israel, India and the U.K. all proposed plans for the rapid deployment of renewable energy to lower their carbon emissions. In the U.S., a coalition of state governors signed an accord committing to expand solar and wind energy. Demand for electric vehicles has also soared with Tesla’s Model 3 receiving a record-breaking number of pre-orders upon announcement.

The Paris Agreement sent a signal to the world that it’s time for strong climate action and a rapid shift to a clean energy economy. Governments, businesses and individuals have already heeded this call and an ever-increasing number are joining the movement as the Paris Effect continues to spread around the world.

This article was originally published on Climate Nexus
__________________
Climate Nexus is a strategic communications group dedicated to highlighting the wide-ranging impacts of climate change and clean energy solutions in the United States. Click to visit the website or follow on twitter. 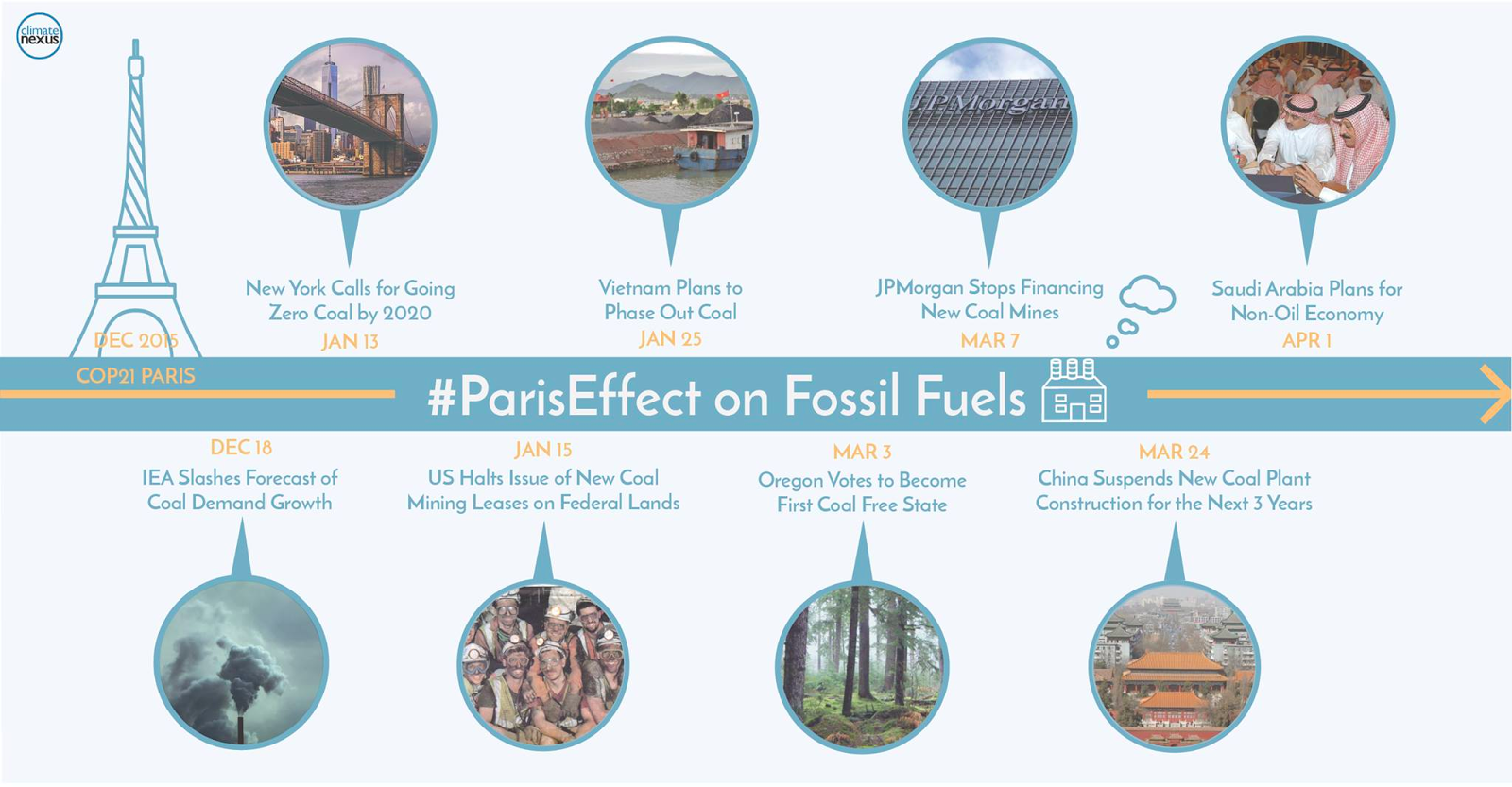 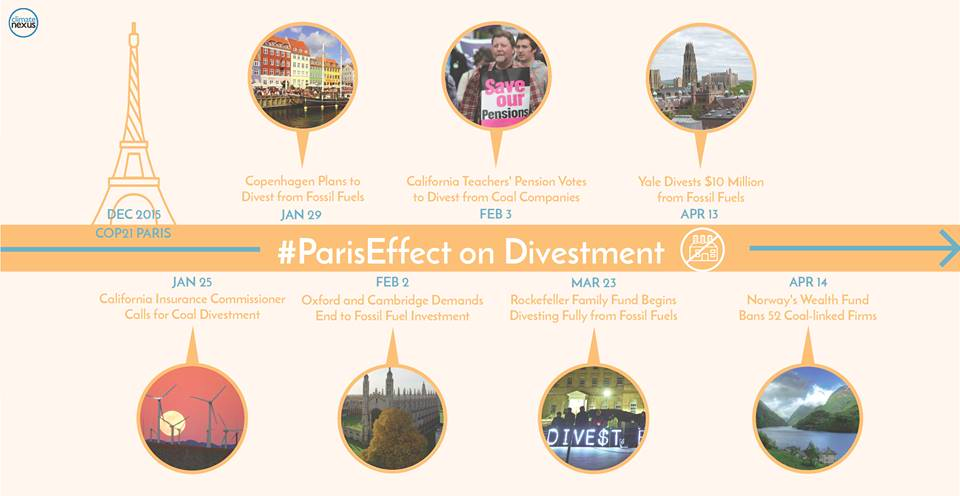 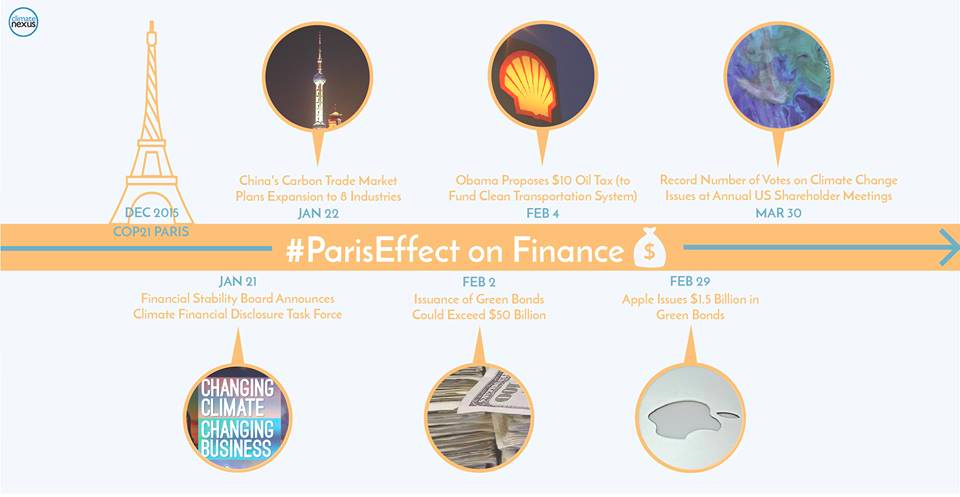 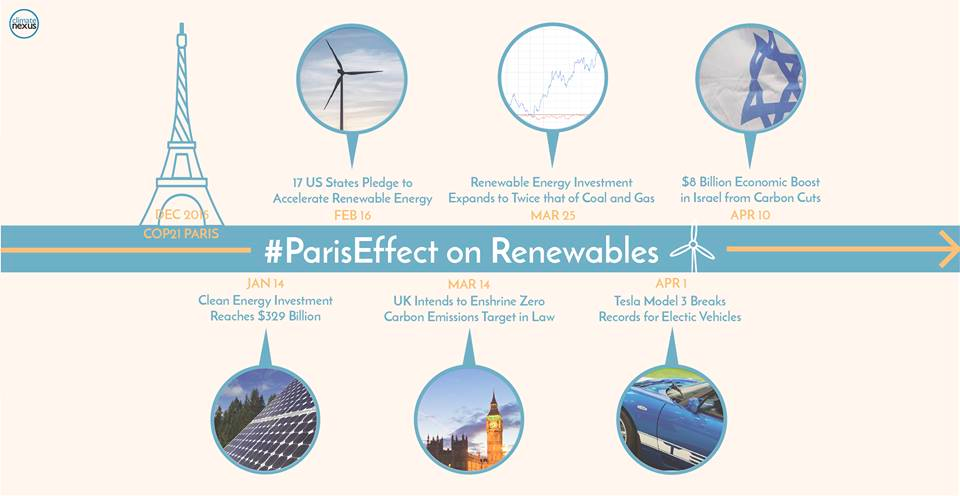 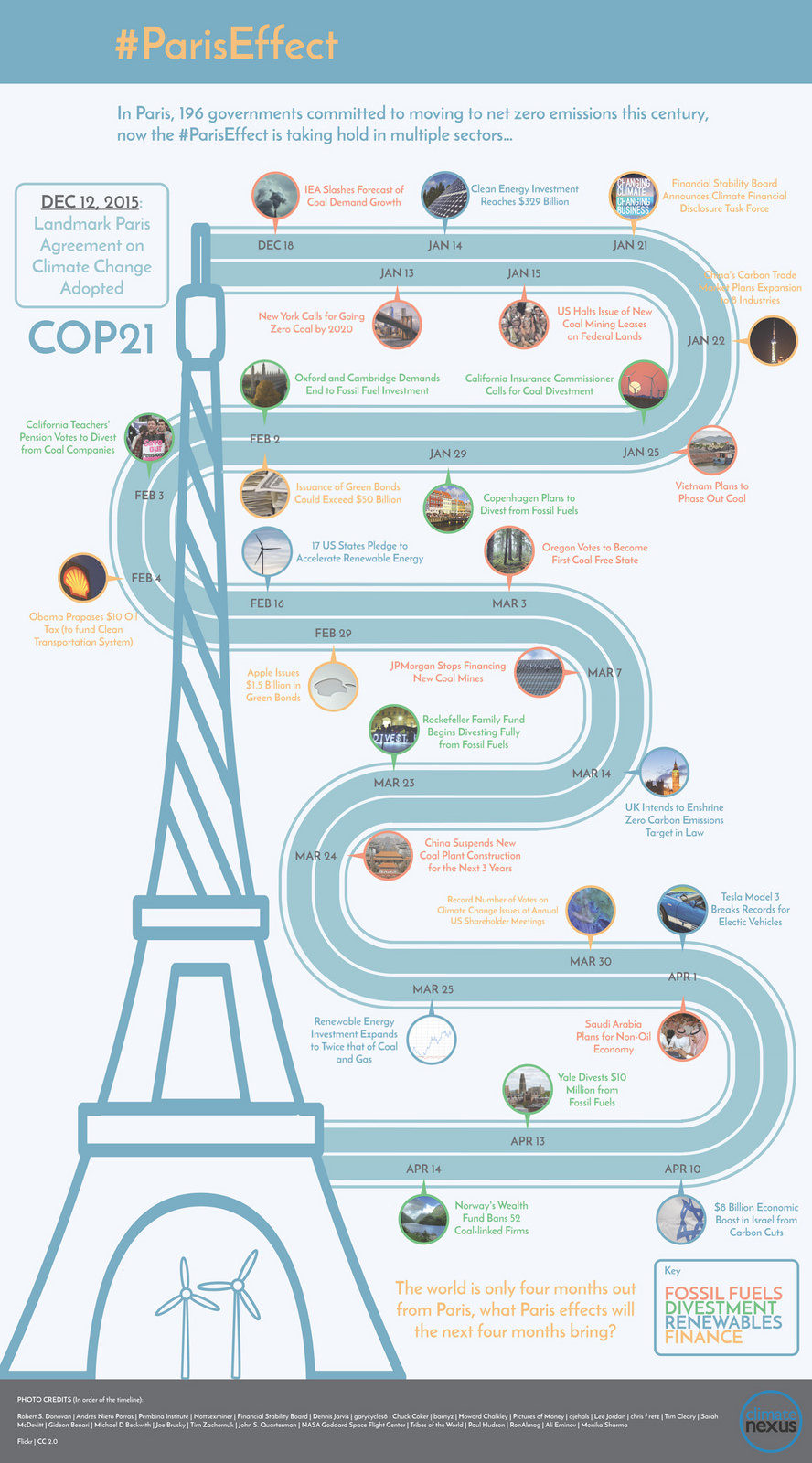