June 13, 2013 /3BL Media/ -- Last week, I was lucky to attend the Social Impact through Social Enterprise panel at the 2013 CECP Summit: Ahead, Together. Kevin Lynch of the Social Enterprise Alliance moderated a discussion that included Gary Hattem of the Deutsche Bank Americas Foundation, Dr. Marc Spencer of Juma Ventures, and Tyler Spalding of eBay Inc. I noticed two interesting themes that ran through the speakers’ narratives about their work that also point to broader movements in business.

The first theme was most succinctly described by Tyler Spalding, who said that eBay’s motto when launching a new social good program is “test and learn.” The eBay Foundation team started small when making investments in social enterprises, but they made strategic choices when partnering that enabled them to learn by doing.

Tyler referenced eBay’s partnership with Ashoka Changemakers as one example that gave the foundation exposure to hundreds of social entrepreneurs, and that allowed it to shape its model going forward as it invested in enterprises like Samasource and funds like Unitus

Tyler’s comments were echoed by Marc Spencer of Juma Ventures, which is a social enterprise that combines employment, college prep, and financial asset building for underserved youth to prepare them for college.

Marc talked about how Juma started with an agreement with Ben Jerry’s to run a Scoop Shop retail store that would employ homeless youth. It was a good idea, but the model didn’t work. After $3 million and a few years invested, Marc realized that the model wasn’t sustainable and that he needed to change course. So, he launched a stadium concession business that is now operating sustainably in six cities and serving 700 youth annually. He tested, he learned, and he changed course.

The second theme I noticed was the panelists’ focus on finding ways that investing for impact could be more integrated into core business strategy. The shared value concept certainly isn’t new, but adding social investments to corporate foundation portfolios (instead of only grants) adds a new tool to the toolbox.

Gary Hattem talked about Deutsche Bank’s entry into impact investing. He said that the company wanted to be more effective in moving capital to areas outside of the economic mainstream. At the same time, it wanted to have a recurring impact without a constant stream of philanthropic outlay. So, Deutsche Bank began providing capital to underserved communities. Gary said that out of the $2.5 billion in loans and investments, Deutsche Bank has written off less than $100,000—not a bad ratio.

We still have a way to go. Gary cautioned that the work is labor-intensive and not without risk. But companies like Deutsche Bank and eBay are pioneers that the rest of us can look to for creative strategies on how to mobilize capital along a spectrum—from straight grants to market-rate investments—that can create social and business value.

The conversation during the panel reminded me of a recent video of eBay’s founder Pierre Omidyar, who is a leader in the social enterprise field. When asked about “giving back,” he said he didn’t like the concept. To loosely quote, he said, “If you’re giving back now, what were you doing before you started giving back? It kind of means you were taking away. And how sad is that?”

He concludes his interview by saying, “everything we do, whether it’s in the business environment, in a nonprofit, or as a philanthropist, we should be trying to make the world better.” That’s a great rallying cry, as we seek to expand the opportunities for business to create financial and social value.

Kate Ahern is Vice President of Social Innovation at The Case Foundation. 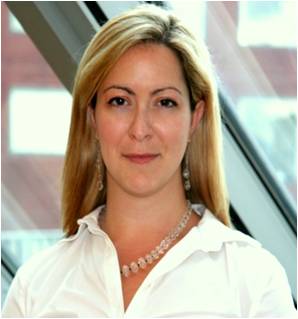