Make-A-Wish Reunites Wish Kids With Loved Ones, Grants Their One True Wish

Friends, family, four-legged companions – For many of us, spending Thanksgiving and the holidays with our loved ones is a routine for which we are grateful. For some wish kids, being able to spend time with loved ones is their one, true wish. In celebration of Thanksgiving, Make-A-Wish highlights wishes that involving reuniting wish kids with the ones they hold near and dear, regardless of the distance and obstacles that separate them.

"I wish to go to Japan to visit my brother in the U.S. Air Force.”

Seventeen-year-old wish kid Jonah’s best friend is his big brother Jared, a member of the U.S. Air Force. When Jonah learned he had bone cancer, Jared was halfway around the globe. When Make-A-Wish wish granters met with Jonah, he knew what his ultimate wish would be: to go visit his brother in the Air Force.

As Jonah’s wish granters at Make-A-Wish Minnesota were putting the final touches on Jonah’s wish and preparing to send Jonah and his family to Japan, units at Misawa Air Force Base inspired by him were making special arrangements for their guest.

At Misawa, Jonah participated in military working dog demonstrations, got a close-up look at an F-16 Viper, experienced a simulated parachute jump and became fast friends with the service-men and women. Most importantly, he spent lots of time with his best friend, his big brother.

“I wish to go reunite with my mother and sister.”

When wish granters from Make-A-Wish Ohio, Kentucky & Indiana met with 6-year-old wish kid Ateika, it had been more than a year since she had seen her mother and sister. She and her father had moved from Yemen to the United States, so Ateika could receive the best treatments for her cancer.

Ateika knew what to tell her wish granters right away, because it was something she wished for every day; she wanted to see her mother and sister again.

Her wish granters began circumnavigating the difficulties of international travel, particularly from Yemen to the United States. They arranged for Ateika’s sister and mother to fly to Egypt, where Ateika and her dad would fly to meet them.

Reunited, the family of four visited the beach, played games, and enjoyed just being together.

“I wish to have my dog come home.”

Dogs are said to be “man’s best friend,” and for many, they’re another member of the family. This was the case for 10-year-old wish kid Francisco’s family and their dog, Popelle.

Five years ago, when Francisco, Popelle and their family were returning from a trip to Mexico, Popelle, who had been with his family since he was a puppy, was not allowed to pass customs into the United States. Therefore, Francisco’s family arranged for Popelle to live with relatives in Mexico.

Francisco’s wish granters spent five months coordinating Popelle’s return to the United States. On the day of his return, Francisco’s parents took Francisco to the airport on the pretense that they were picking up an uncle, but when he saw his wish granters in their Make-A-Wish shirts, he knew something big was about to happen – and it did. 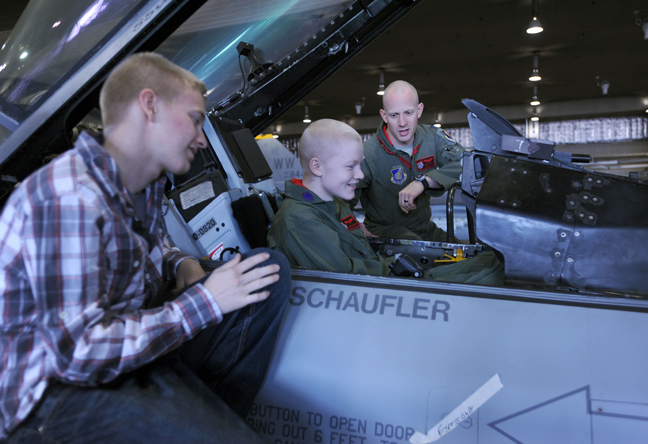