The Future of Mobility - the Mercedes-Benz Future Bus

What urban public transport will look like in the future is shown by the semi-automated city bus with CityPilot – it operates even more safely, efficiently and comfortably than conventional buses
Aug 25, 2016 8:00 AM ET
Tweet This:
.@Daimler_News examines the future of public transport, operating with more safety & efficiency http://bit.ly/2apuivb #CityPilot
Summary:

The technology of the CityPilot in the Mercedes-Benz Future Bus is based on that of the autonomously driving Mercedes-Benz Actros truck with Highway Pilot presented two years ago. It has however undergone substantial further development specifically for use in a city bus, with numerous added functions. The CityPilot is able to recognise traffic lights, communicate with them and safely negotiate junctions controlled by them. It can also recognise obstacles, especially pedestrians on the road, and brake autonomously. It approaches bus stops automatically, where it opens and closes its doors. And not least, it is able to drive through tunnels.

Just under a dozen cameras scan the road and surroundings, while long and short-range radar systems constantly monitor the route ahead. There is also a GPS system. Thanks to data fusion, all the data received create an extremely precise picture and allow the bus to be positioned to within centimetres. This already works in practice, as demonstrated by the world premiere of the CityPilot on an exacting route covering almost 20 km, with a number of tight bends, tunnels, numerous bus stops and involving high speeds for a city bus.

This semi-automated city bus improves safety, as it relieves its driver's workload and nothing remains hidden from its cameras and radar systems. It improves efficiency, as its smooth, predictive driving style saves wear and tear while lowering fuel consumption and emissions. With its smooth and even rate of travel it also improves the comfort of its passengers.

The around twelve metre long solo bus based on the globally best-selling Citaro is a completely new departure in terms of exterior and interior design. Its harmonious lines and asymmetrical contours take their lead from city architecture. Whether with its design, lighting, door layout or information systems – the unique Mercedes-Benz Future Bus fully lives up to its name.

The same applies to the interior, the open-plan design of which takes its lead from city squares and parks. The passenger compartment is truly a passenger's dream. It is divided into three zones for different lengths of stay. Designer seats are loosely arranged along the walls in each zone. Innovative grab rails reflect the park-like theme by branching upwards like trees towards the two-tone ceiling. The ceiling lighting resembles a leaf canopy. Operators are able to relay information and entertainment via large monitors in the middle segment of the passenger compartment. The completely newly designed cockpit is an integral part of the interior space. The driver receives the information he/she requires from a large screen with an innovative display.

20 km journey without steering, accelerating and without brake pedal

The Mercedes-Benz Future Bus with CityPilot is making its first public journey on part of Europe's longest BRT route (BRT = Bus Rapid Transit) in the Netherlands. This links Amsterdam's Schiphol airport with the town of Haarlem. This almost 20 km long route is a real challenge for the

Mercedes-Benz Future Bus, as it has numerous bends and passes through tunnels and across junctions with traffic lights.

The Mercedes-Benz Future Bus with CityPilot is well able to meet this challenge: it has a top speed of 70 km/h on the open road, is able to recognise obstacles and pedestrians on the road, comes to a precise halt at bus stops, opens and closes its doors, moves off automatically and communicates with traffic light systems. Throughout the journey the driver does not need to operate the accelerator or brake at all, and only needs to take the wheel in accordance with traffic regulations when there is oncoming traffic. However, the driver is able to intervene at any time and immediately take control if required.

Mercedes-Benz Future Bus with CityPilot – the future of the city bus has begun. It is ideally suitable for BRT systems, with which it is possible to resolve worldwide traffic problems in densely populated areas and metropolitan regions. It operates highly efficiently, significantly improves the level of safety and relieves driver workload. Daimler Buses is thereby developing the bus transport system of tomorrow. 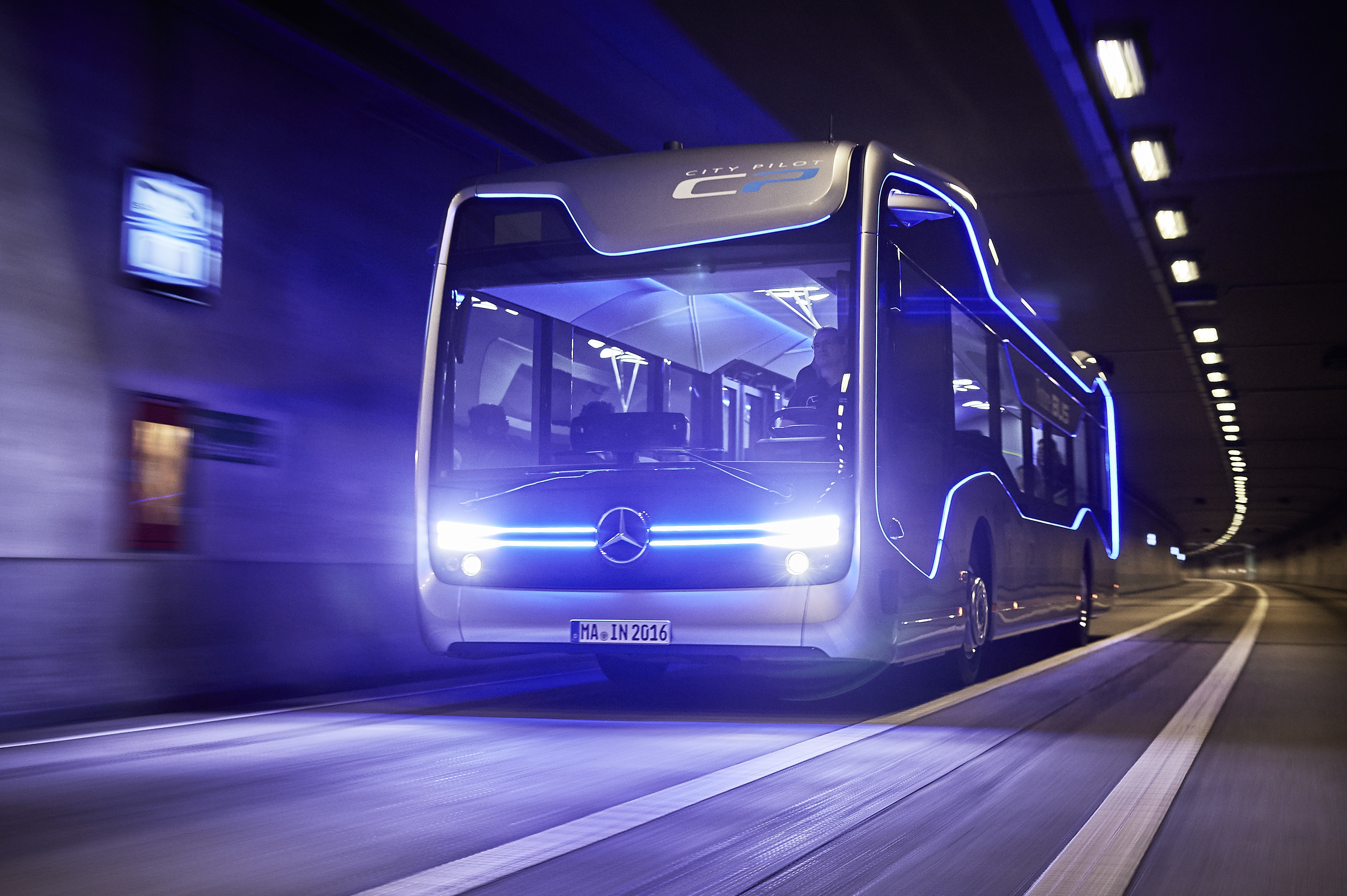 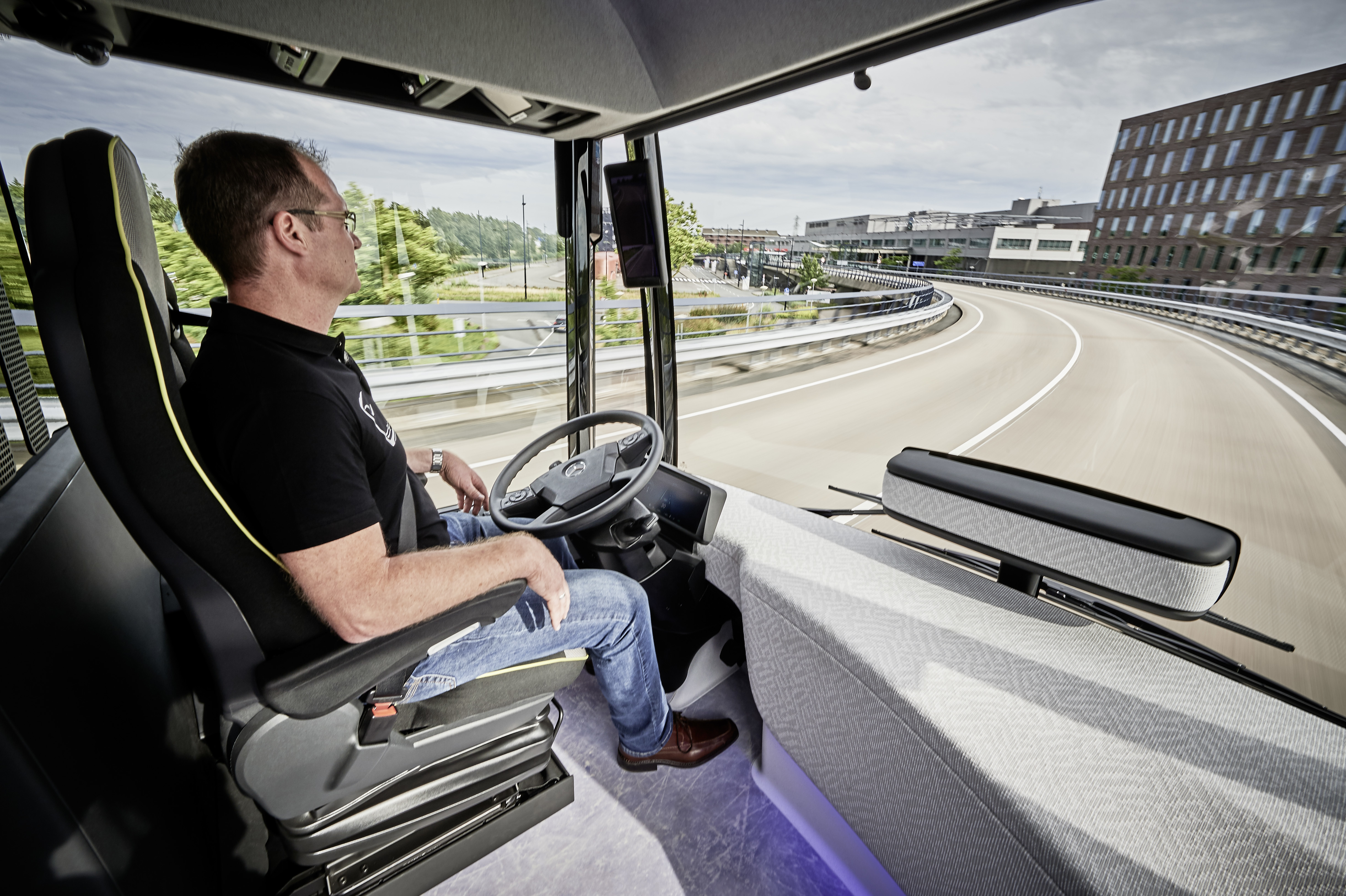 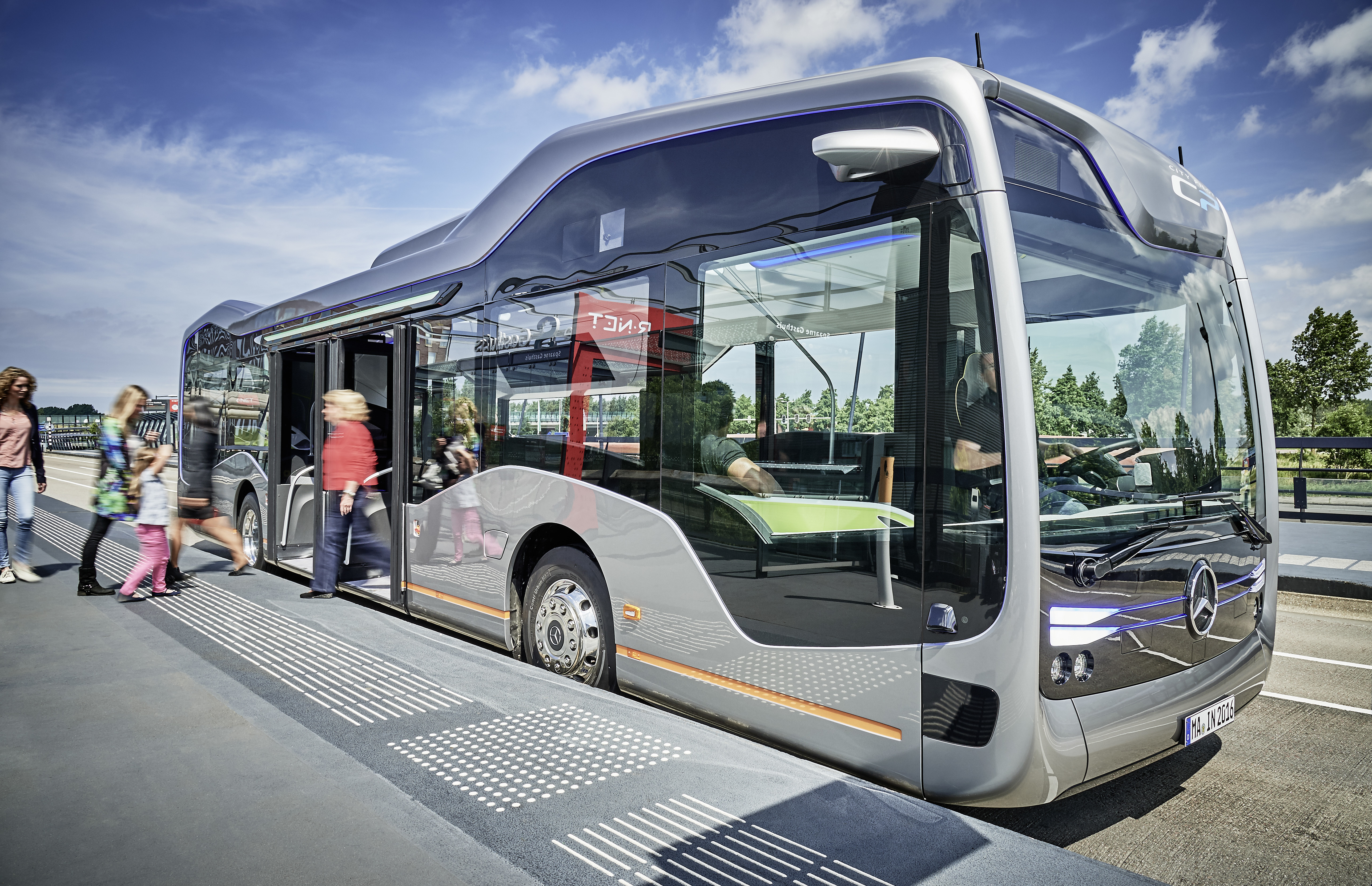