Release of New Report Paired with Launch of the Global Exchange, an Initiative led by CECP to Unite Like-Minded Organizations
Sep 22, 2016 12:00 PM ET
Tweet This:
.@CECPtweets #CSR benchmarking research is “going global.” Are you? Read #GATG16 at http://cecp.co/global
Press Release

NEW YORK, September 22, 2016 /3BL Media/ - A leading study shows a sharp increase in corporate societal engagement across borders in Africa and Asia, and the continuation of a high-level of international corporate societal investment in Europe. Giving Around the Globe, released by CECP, the CEO Force for Good, is the result of a comprehensive analysis of data from over 120 large companies headquartered in 20 countries across the world. This is the fourth edition of the expanded report, benchmarking global corporate engagement activities in multiple regions around the world and analyzing trends and developments among leading companies.

Societal engagement is on the rise globally, however levels are uneven: While 65% of Asian companies gave internationally to charitable causes in 2015, just 25% of companies headquartered in South Africa reported giving internationally. Similarly, 81% of companies in Europe gave internationally, compared to 38% in Latin America. Factors responsible for the pattern of irregular engagement can include a variety of external forces, including regional economic and political stability, extent of business footprint abroad, level of government responsibility for social welfare, historical trends, and cultural practices.

Critically, however, the data and insights from Giving Around the Globe can inform corporate giving teams about the need for a nuanced and culturally aware societal engagement programs. For example:

The CECP report highlights some of the emerging issues affecting each region of the world, such as the refugee crisis affecting Europe and how companies are responding; the growing role and importance of entrepreneurism in Africa and how some large companies are offering their support; India’s 2% Corporate Social Responsibility (CSR) mandate and its effects on the sector two years since its implementation; Brazil’s changing economy and how CSR is changing along with it; and how companies are implementing strategies to meet the United Nations’ Sustainable Development Goals.

“Leaders in corporate societal engagement programs are asked to strategize globally, regardless of where they are based,” stated Carmen Perez, Director, Data Insights, CECP. “Giving Around the Globe offers data-backed insights and implications that give CSR teams a clear perspective on the state of global community investment. This knowledge will help translate global strategic goals to a regional and local level and, ultimately, make a stronger impact.”

Reflecting the increasing importance of understanding the trajectory of international corporate societal engagement, CECP is launching the Global Exchange to coincide with the publication of Giving Around the Globe. The Global Exchange is a first-of-its-kind network of affiliated organizations across the world that help companies advance their investments in community engagement, philanthropy, and corporate social responsibility. The launch kicks off the Global Exchange’s flagship year of building the network and expanding the global corporate force for good.

The report can be downloaded, for free, on the CECP’s website: http://cecp.co/global. To learn more about the Global Exchange, please visit http://cecp.co/membership/global-exchange.html.

ABOUT CECP: THE CEO FORCE FOR GOOD
CECP is a coalition of CEOs united in the belief that societal improvement is an essential measure of business performance. Founded in 1999 by Paul Newman and other business leaders, CECP has grown to a movement of 150 CEOs of the world’s largest companies across all industries. Revenues of engaged companies sum to $7 trillion annually. A nonprofit organization, CECP offers participating companies one-on-one consultation, networking events, exclusive data, media support and case studies on corporate engagement. For more information, visit http://cecp.co. 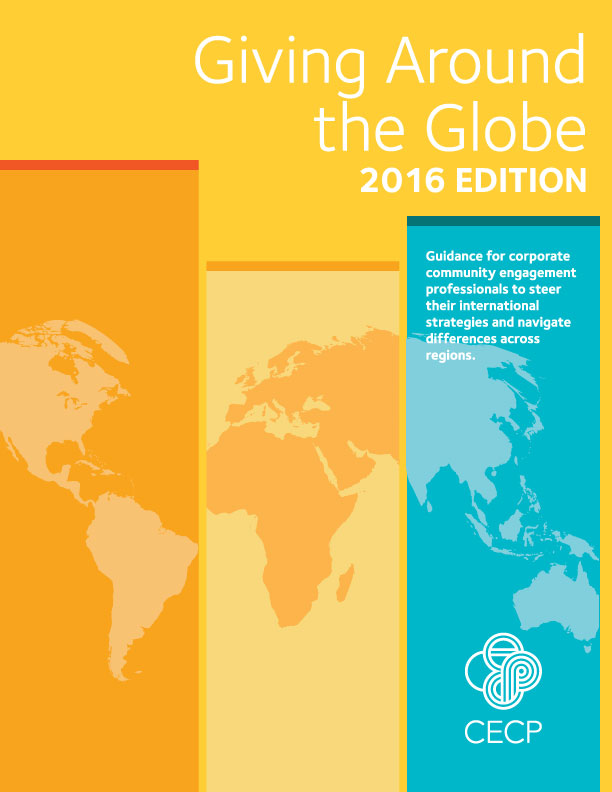