“We applaud the growing number of countries that have already set ambitious targets for climate action,” the American Business Act on Climate Pledge states. “In this context, we support the conclusion of a climate change agreement in Paris that takes a strong step forward toward a low-carbon, sustainable future.”

By signing the pledge, companies are:

“It’s enormously gratifying to be working directly with so many companies that are making the White House pledge,” said Ceres president Mindy Lubber, who joined the 19 Ceres-related companies at the White House event, and introduced Vice President Joseph Biden. “Such leadership is critical in tackling this colossal global threat. But, of course, they can do far more if a strong climate agreement is achieved in Paris.”

Among the new pledge commitments by companies that are Ceres corporate network members or BICEP members:

For more information about all of the company pledges announced at the White House, read this White House Fact Sheet. 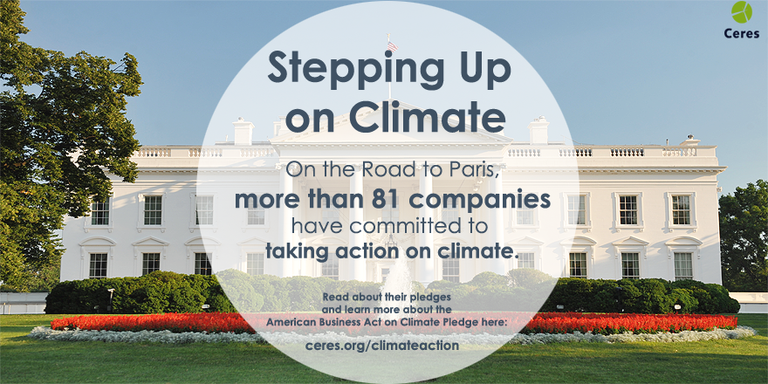 Ceres Celebrates the Leaders in Corporate Sustainability Policy With 2022 BICEP Awards
May 12, 2022 4:45 PM ET
Major U.S. Companies and Investors Urge Congress to LEAD on Climate
May 11, 2022 10:00 AM ET
New Report Finds Half of All Credit Union Industry Assets at Risk From Climate Change
May 10, 2022 9:50 AM ET
Business Leaders to Make Urgent Call for Federal Clean Energy Investments at LEAD on Climate 2022
May 6, 2022 10:00 AM ET
SEC Chair Gensler Joined Ceres, Investors, and Companies for a Closer Look at Standardized Climate Disclosure
May 3, 2022 11:30 AM ET