Oct 10, 2014 1:50 PM ET
Tweet This:
With support from @fedex, @safekidsusa surveyed teens about walking habits. Find out what they learned:http://3bl.me/gg8b2m #walksafely
Press Release

Every hour of every day, a teen pedestrian is killed or injured in the U.S.

The report, “Teens on the Move” made possible with support from FedEx®, explores walking behaviors of 1,040 teens ages 13 to 19.

According to the research, distraction plays a role; half of teens surveyed say they cross the street while distracted by a mobile device. Teens who had been hit or nearly hit more frequently reported crossing in the middle of a block or running across the street. The research includes an examination of fatality data that shows 75 percent of teen pedestrian deaths occur between 7pm and 7am, when it’s dark out.

The new report expands on findings from a 2013 Safe Kids report that observed middle school and high school students crossing the street. That study revealed 1 in 5 high schoolers and 1 in 8 middle schoolers cross while distracted by technology.

“Even though we all know about the dangers of texting when walking or driving, it is still a common practice, especially for teens,” said Kate Carr, president and CEO of Safe Kids Worldwide. “This is a trend we simply must stop.”

Safe Kids Worldwide and FedEx recommend the following tips to keep teens, and all of us, safe while walking. 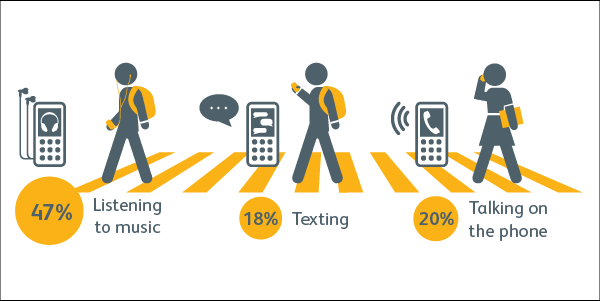