VANCOUVER, BC, June 2, 2014 /3BL Media/ – While the Whitecaps FC fought their way to a dramatic 2-2 draw, responsible Whitecaps FC supporters who attended the match at BC Place against the Seattle Sounders FC on May 24th had the opportunity to receive rewards off of the pitch. The Whitecaps FC, el Jimador and Techniques for Effective Alcohol Management (TEAM) Coalition have partnered to promote responsible drinking and traffic safety through the Cascadia Responsibility Challenge.

130 supporters made the pledge to be responsible by promising to never drive drunk, always have a designated driver, never serve alcohol to anyone under 19 and buckle up - every trip, every time. All of the responsible supporters had the opportunity to autograph a larger-than-life soccer ball and receive a free souvenir photo. Supporters also received El Jimador branded merchandise.

NATIONAL CAMPAIGN: Responsibility Has Its Rewards™

WHO: Supporters and the Community

WHAT: Vancouver Whitecaps FC, el Jimador and TEAM Coalition invited supporters to take the pledge to be responsible soccer supporters, which means never driving drunk, always having a designated driver and buckling up - every trip every time. Responsible supporters autographed a larger-than-life soccer ball and received a free souvenir photo.

WHERE: BC Place, Vancouver Whitecaps FC vs. Seattle Sounders FC

·       Many, if not most of those lives would have been saved if people did not drive when they were impaired by alcohol or if they used sober, designated drivers or if they simply wore their seat belts.

·       Statistics and research clearly show that 21-34 year old males are the demographic most likely to be involved in an automobile crash, drive when impaired by alcohol, and fail to buckle up. 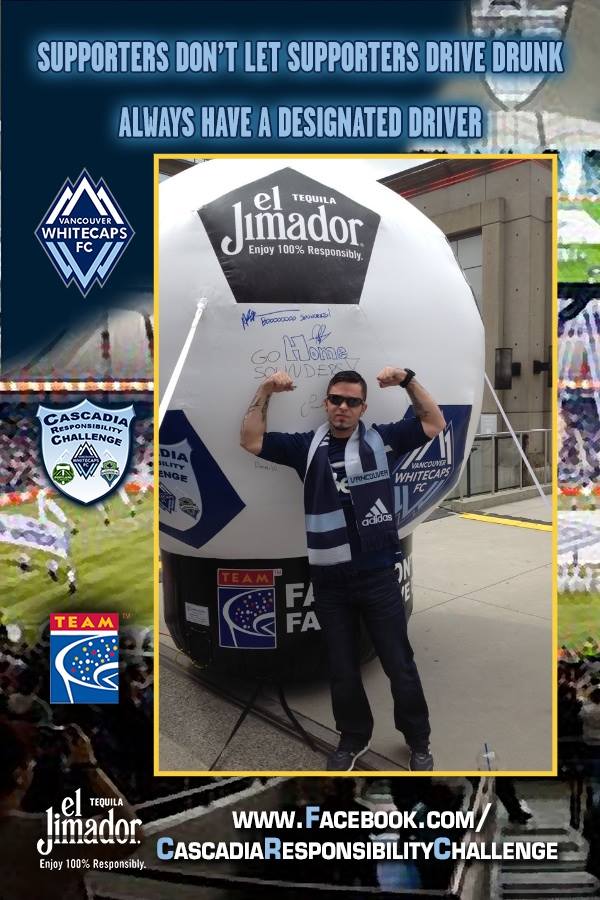